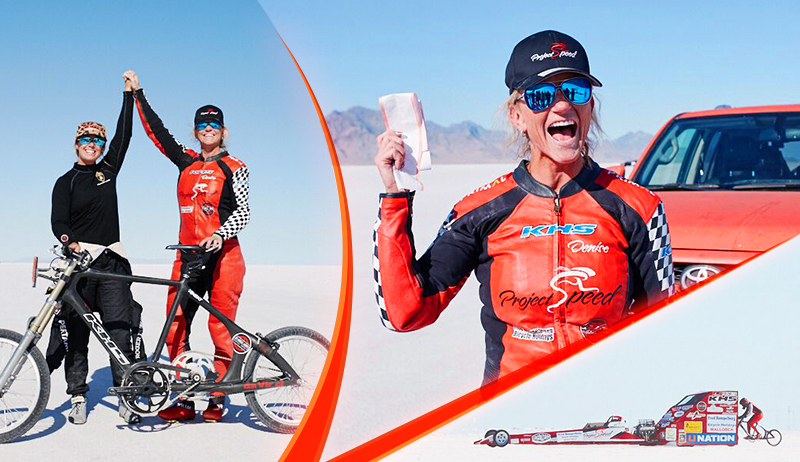 We here at RSF Security Systems are bursting at the seams with pride over our fearless leader, Denise Mueller-Korenek. Not only is she CEO extraordinaire on a normal day, but the 15-time bicycling USA National Champion is now the fastest human on a bicycle!

Denise shattered the existing motor-paced cycling land speed record of 166.9 mph previously set by Dutch cyclist Fred Rompelberg in 1995 Sunday, September 16, 2018, when she was clocked at 183.9 mph on the Bonneville Salt Flats in Utah.

The record was set during the World of Speed, a four-day motorsports rally hosted by the Utah Salt Flats Racing Association and featuring high-speed race cars, motorcycles, and dragsters, including one with a record-breaking bicyclist behind it!

Denise rode her custom bike which is being called a marvel of engineering. The bike is equipped with motorcycle wheels and two 60-tooth chainrings which work in combination with a 12-tooth cog, an unusual accommodation which allows her to cover 130 feet of travel in a single pedal stroke.

You can see some of the amazing highlights and Denise’s reaction to her time on Facebook. Be sure to leave a comment to let her and her amazing team know you dropped by!